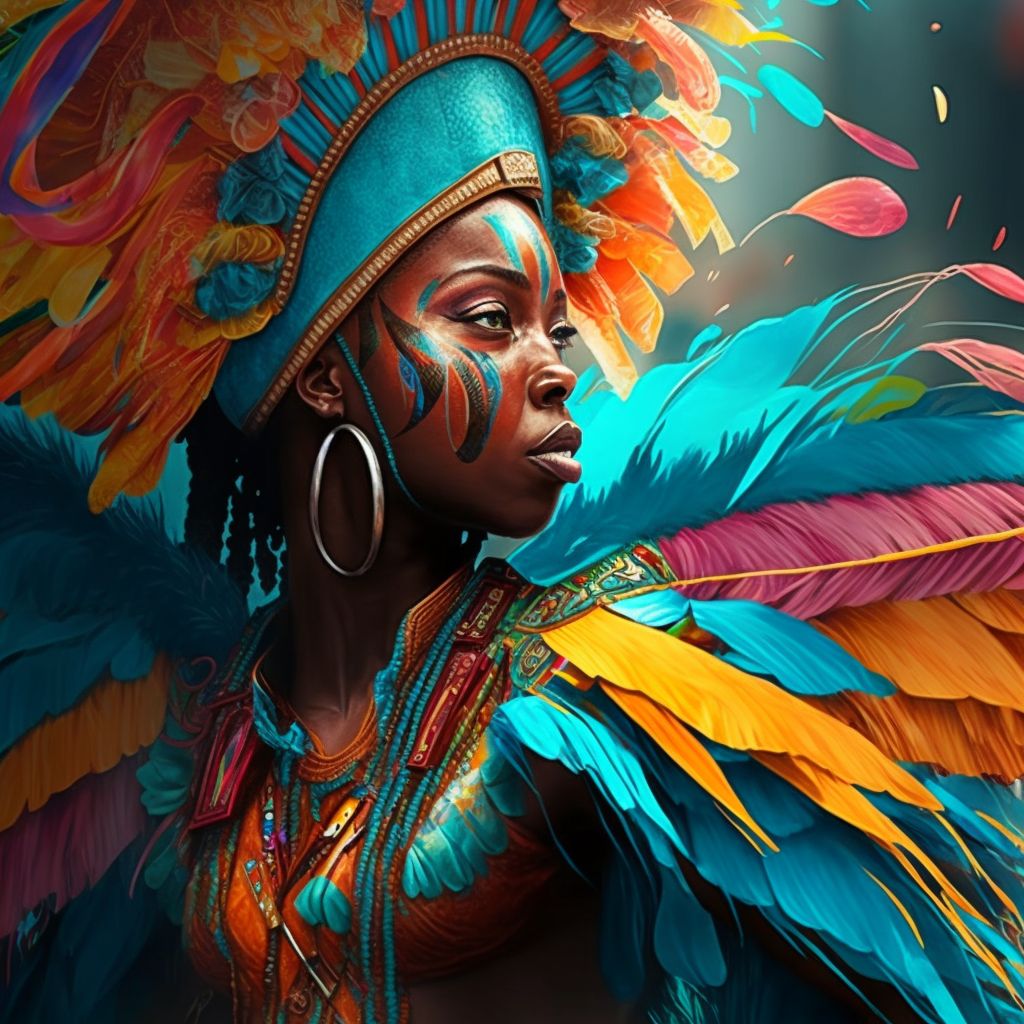 Gusty winds of social, cultural and economic change have blown through the streets of New York in recent years, and for the Caribbean communities that have long taken up space in the five Boroughs, the evolution has brought about a sense of unease, precariousness, displacement and loss. 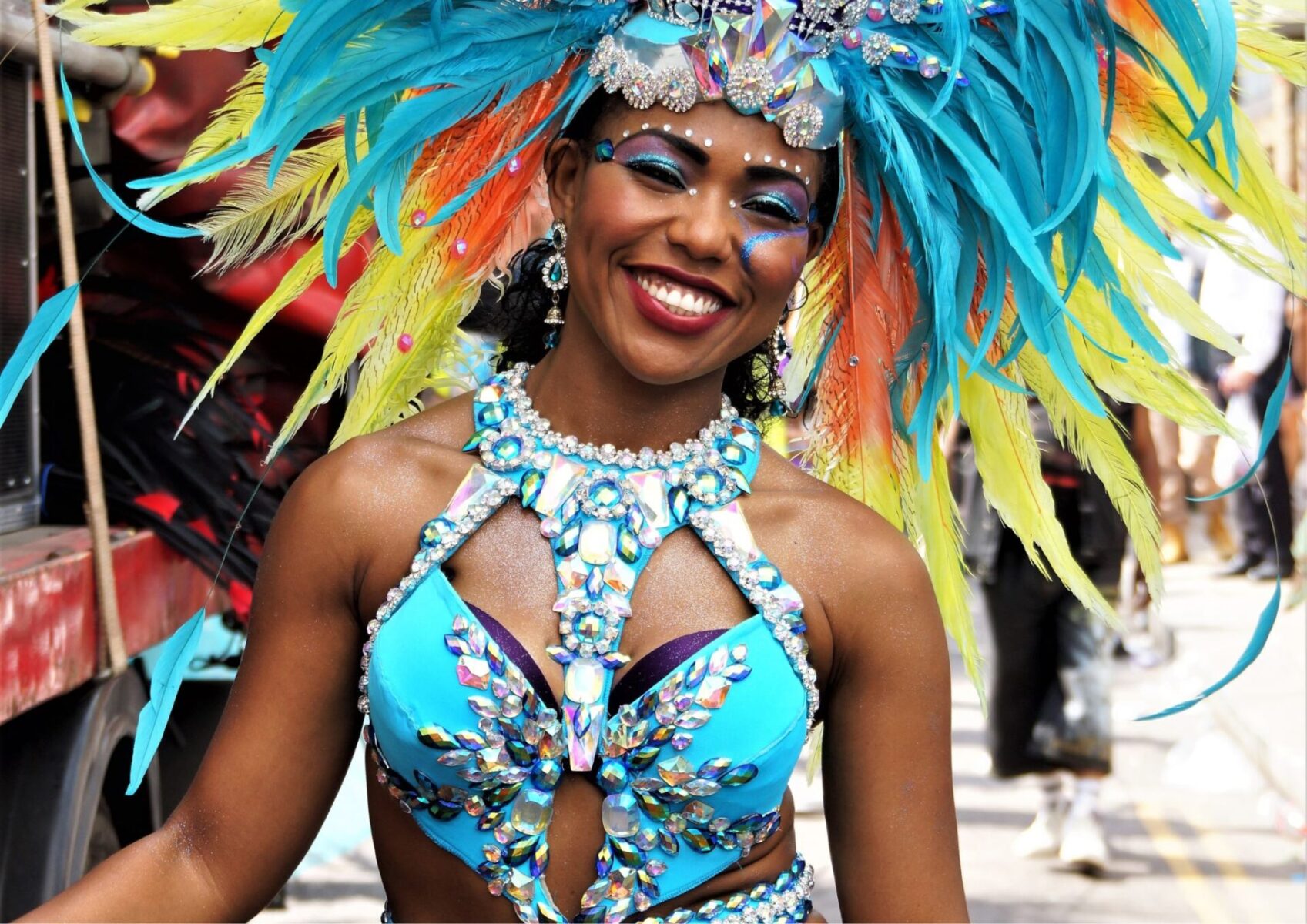 During this year’s Labor Day weekend – which annually recognizes the invaluable works and contributions of laborers to the development and achievements of the United States – the holiday apexed with the highly-anticipated West Indian Day parade. However, following a two-year hiatus due to the COVID-19 pandemic, a litany of violent incidents and intensified conversations on gentrification, a new climate has emerged.

The air of celebration and collective pride that normally showcases the cultural vibrancy of the islands has turned into one of grave concern for many Caribbean immigrant residents, tourists and supporters.

The community now questions the rapid erasure of Carnival and the threatened future of the longstanding festival in the Empire State.

Originally born in Harlem, New York’s West Indian Day parade traces its origins back to costume parties in the 1930’s, hosted by Jesse Waddell in social spaces such as the Savoy, Renaissance and Audubon Ballrooms.

These soirées were infused with the sights and sounds of the Caribbean from islands such as Trinidad and Tobago, Barbados, Haiti, Jamaica, St. Lucia and Dominica, brought to North American by immigrants who were intent on preserving their African traditions. Carnival activities also amplified neocolonial resistance despite the inflicted brutalities of the Transatlantic Slave Trade that sought to silence the cultural noise.

For Dr. Natasha Lightfoot, associate professor of history at Columbia University, there’s no doubt that the Caribbean immigrant culture has played an indispensable role in the mosaic of the African American experience.

“Caribbean Americans have always intermixed with and organized alongside African Americans to build a vibrant culture in NYC and other areas of the US where the two groups proliferate – including Boston, Philadelphia, Atlanta and Miami,” she reasoned.

Dr. Lightfoot, whose family is of Antiguan heritage, notes that colonized people from the Caribbean were aware of the inequalities even as Black majorities in their indigenous space, but building community in the US became a key tool for pushback as a new group of Black minorities in the face of white supremacy in a new country.

For example, when the permit for Carnival Street parade was subsequently revoked by public officials in 1964, an interest body emerged to protect the interests of Caribbean culture in the state. Today, this committee is known as West Indian-American Day Carnival Association (WIADCA) – widely recognized for organizing solidarity and creating spaces for Caribbean people in the US that felt like “home.”

“One form of resistance would be through cultural expression. By holding fast to traditions such as Carnival and helping to build new Afrocentric cultures in collaboration with African Americans such as Hip Hop, West Indians built community,” Dr. Lightfoot said. 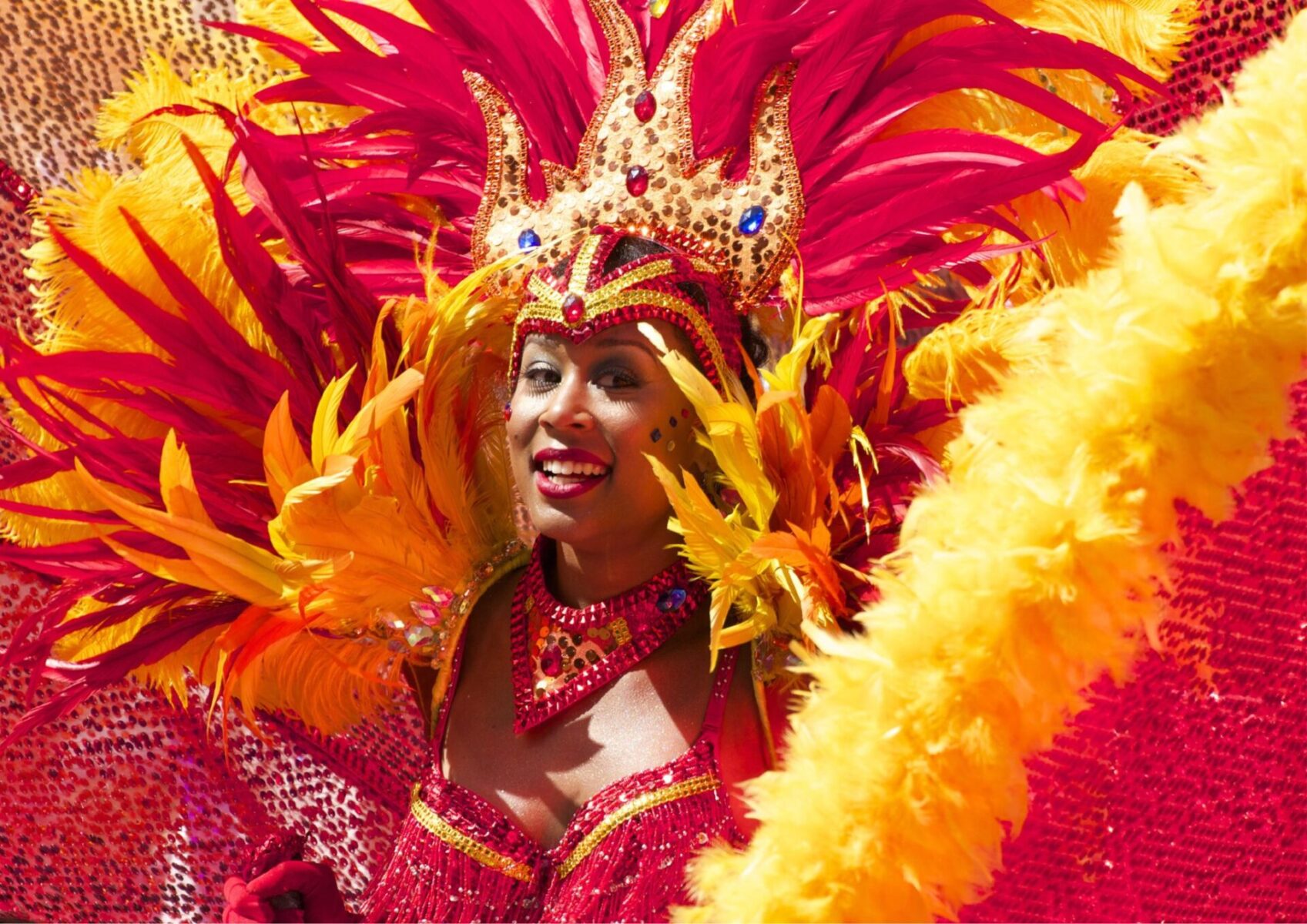 Against the backdrop of Labor Day being an important pillar of traditions and history for the New York-Caribbean community that seeks to hold on to its ties with home, however, there has been a spate of violent crimes which has plagued the Carnival Parade and annexed J’Ouvert celebrations. Gun violence and sexual assault has marred the weekend festivities in the history of the Parade – such as the 2015 shooting death Carey Gabay, aide to former Governor Andrew Cuomo and the murder of Tiarah Poyau in 2016 for refusing the sexual advances of a man unknown to her, which sparked an intense debate on violence against women and other vulnerable groups. As a result, anti-crime measures have become a major priority for city officials – policies for which have come under fire from activists and community members alike.

Whereas, in recent years, the City of New York has shied away from hosting Carnival activities, this year the NYPD installed a number of safety measures to combat violence, including the installation of light towers, video surveillance and security checkpoints where masqueraders and spectators were searched with metal detectors.

Popular blogger and influencer, Global Carnivalist admitted that while she is happy to hear that systems are being put in place to curb the violence and maintain crowd control, her 2022 Labor Day experience has noticeably changed from previous years.

“I was actually reflecting with my girlfriends recently about how we used to tear up the streets every Labor Day fête and how drastically that’s changed now,” she revealed to MADAMENOIRE. Having already travelled to a number of carnivals this year in the US and overseas, the beloved blogger made the decision to relax this holiday weekend.

“I used to participate in J’Ouvert until the violence got really bad a few years back. While I have been to the Parkway for the parade, I’ve only danced alongside the trucks and enjoyed celebratory amenities at the judging tent, but I have never been a masquerader – I enjoyed going for the food, revelry and music.”

Dr. Lightfoot believes the root cause for these sweeping changes moves beyond the scope of “a few bad apples” perpetuating violent acts, and instead reads structurally as a by-product of prolonged economic instability and overpolicing of Black working class communities in New York over the last two decades— which have socio-cultural and economic consequences for lifelong residents and businesses.

“Communities like Crown Heights and Flatbush appear to the city authorities like they were always/already going to be the scene of a crime,” she analyzed.

The result, according to her, was the rapid intensification of the NYPD presence at the parade, and the decrease of freedom of movement, making communal accessibility a major challenge for the general public and avid cultural enthusiasts.

“Parade goers are just as involved in the Carnival experience as mas makers, or even musicians in the procession – whether on floats or on trucks. The whole vibe changes when barricades block the ability to cross Eastern Parkway or simply walking alongside streets with the removal of ease.”

Coupled with the new, gentrified presence of non-Caribbean, non-Black residents in communities such as Crown Heights who file noise complaints in the name of “quality of life,” she argues that there is a lack of understanding of the cultural and political significance of these weekend-long festivities for the communities that have occupied these spaces for decades.

While New York Council Speaker Adrienne Adams encouraged the public to enjoy 55 years of Caribbean cultural impact and the vitality of Labor Day traditions on her Facebook page, many key players and keen onlookers have also noticed a seismic shift of focus and resources with New York-based mas bands such as Sesame Flyers and Freaks Mas going to the Miami Carnival experience in October, which is an increasingly popular Caribbean diaspora destination choice for masqueraders but ominously signals a decline in interest in the Labor Day experience in New York.

Veteran Carnival costume Designer Marlon Smart – who has offered his creations and lived in Brooklyn for 16 years – will not be designing costumes for this year’s parade.

“As of 2019, the band that I’m affiliated with, Ramajay Mas, made the difficult decision to close the curtains on Labor Day due to logistics and supply chain challenges that accelerated with the pandemic,” he explained.

With an increase in complaints from masqueraders about non-costumed attendees invading the parade route – widely known in the community as “stormers” – there has been a significant participation exodus from the parade which has affected businesses and vendors like Smart. He added, “Like most of the other major Labor Day bands this year who opted out of the parade, I’ll be focused instead on Miami and Trinidad Carnival.” 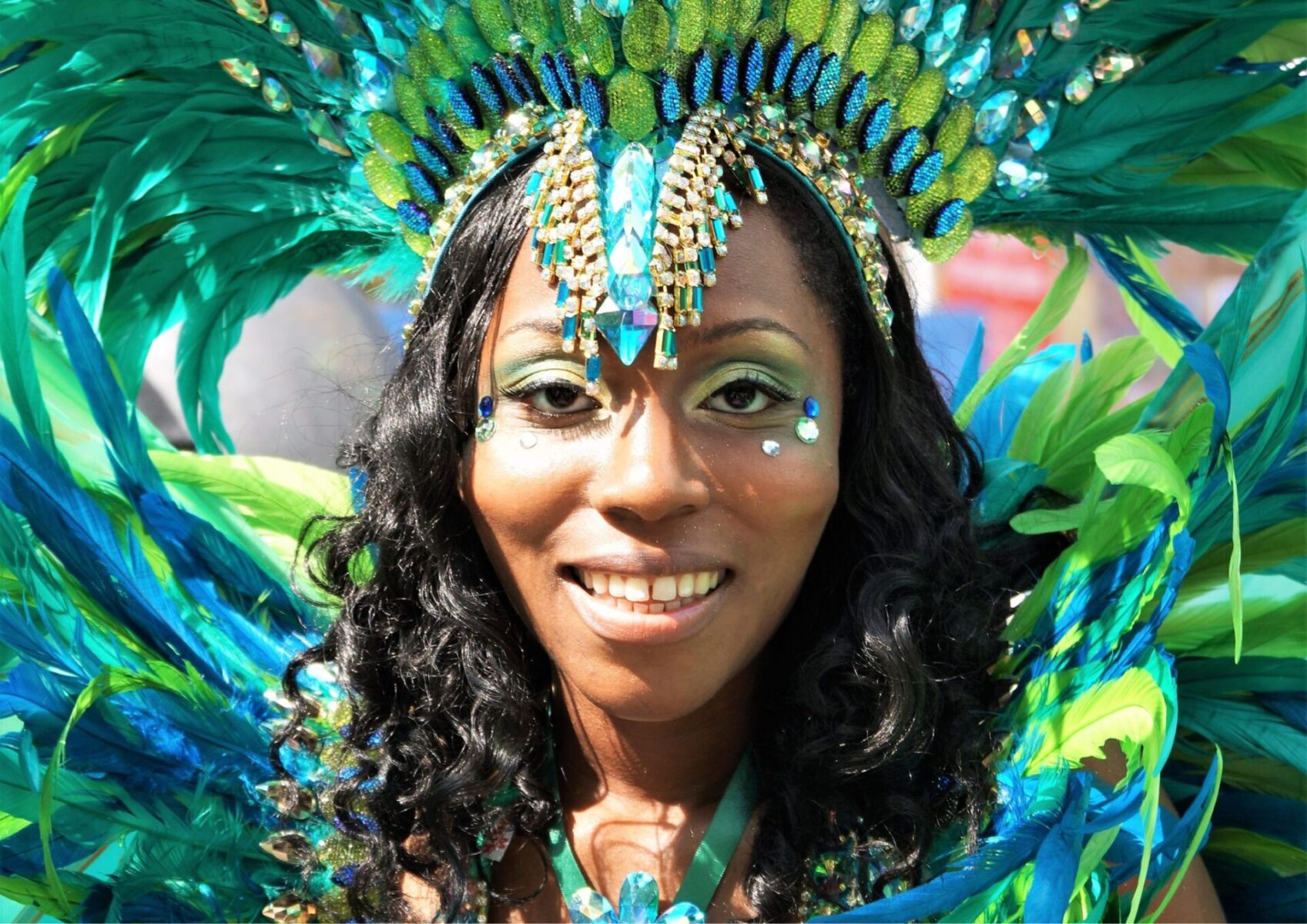 The East Coast metropolis is facing similarly concerned conversations about stormers and overpolicing which have also plagued other Caribbean Carnivals in North America and Europe, such as the neighbouring Toronto Caribbean Carnival (formerly Caribana) and the recently-concluded Notting Hill Carnival in London.

Award-winning Music and Culture Writer, Sharine Taylor believes that it’s a tiered problem propelled by a number of factors.

“In places like New York, Miami and Toronto, those are the entry points for people who might not know about the Carnival ecosystem back home and get the chance to experience ‘boutique multiculturalism’ in these spaces – experiencing the culture but not indulging in it fully. There is also a blurred line between spectator and participant: the way that we as a community have sold the idea of culture in post-independent economies in the Caribbean have sold culture as a tourist project promotes a kind of inclusivity which removes the idea that there is a level of expertise required to participate in (our) culture,” she explained.

Canadian-born Taylor, who is of Jamaican descent, expressed concern for the cultural reverence of the carnival experience, especially given the lack of public knowledge surrounding the genesis and history of the festivals.

“I always try to be mindful of who I am and what Carnival means to the region,” she surmised.

As someone who has participated in it as a guest, Carnival has always been a way for Taylor to reconnect with herself, negotiate the way that she feels about her body and respect the value of these historic practices that allow for the modern-day celebrations.

“I would like for people to consider what circumstances informed Carnival to be established – the slavery and specifically Black people’s relationship to labor and capital – and what it means now: an entire economy and ecosystem that empowers generations of Caribbean descendants as an extension of their culture. There are cornerstones to this native product – the mas, the steelpan, the dance, the music, the art, design. It’s not a spontaneous occurrence and it deserves respect and appreciation.”

For the West Indian Carnival Parade in New York and its staunch supporters, it’s an uphill battle of cultural ownership, where the victor is yet to be named and talks of extinction looms.

With increasing calls for more autonomy and trust from the city powers that are in the hands of the community, there is a lot at stake for the hundreds of thousands of residents who make up the Caribbean landscape in New York and out-of-state tourists who grow increasingly worried about the prognosis of their beloved festival. Exploring the interdependency between policy development, place and space and the will of the people, one thing is certain: it’s an ongoing labor of love for a resilient community that wishes to preserve its cultural roots and stand proudly in its Caribbean identity for years to come.

Bobbi Lockyer was told she couldn’t make it in fashion. Now her cultural designs are heading to New York Fashion Week

Bobbi Lockyer was told she couldn’t make it in fashion. Now her cultural designs are heading to New York Fashion Week