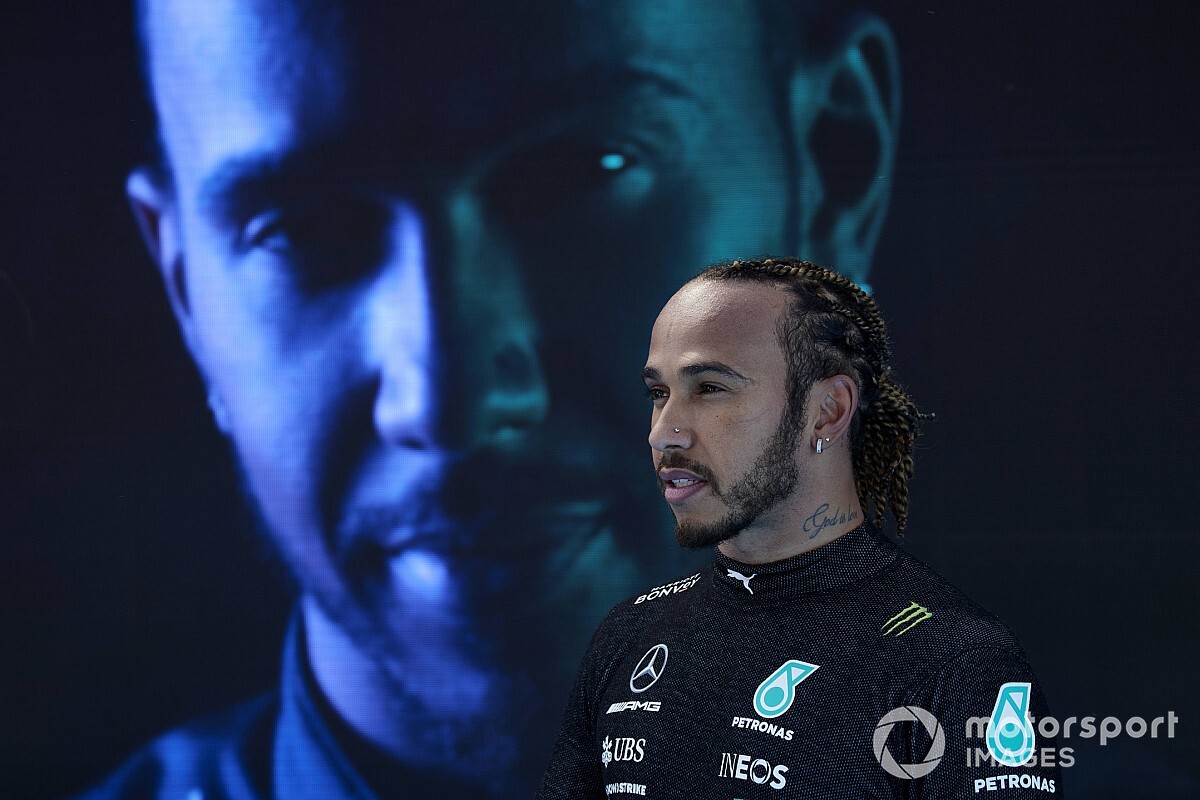 Lewis Hamilton is one of the most successful drivers in the history of Formula 1, but which records does he currently hold?

It feels as though every race in the last year has thrust Hamilton on the path to breaking a new F1 record, largely those once-unbelievable records set by Michael Schumacher.

We have also included the records Hamilton shares with another driver, some of which he could hold alone in the next few years.

Most wins in Formula 1

Hamilton’s dominance has been so profound over the last seven years that not only does he have the most wins (taking 77 of those during his time at Mercedes), but he has almost double the wins of Sebastian Vettel in third place. His first win came in 2007 at the Canadian Grand Prix, just six races into his rookie season, while his most recent win was the 2021 Russian Grand Prix.

Most points in Formula 1

You may be surprised to see the absence of some of the F1 greats of this list, and that is because the current points system of awarding 25 points for a win was only introduced in 2010. Before that, since 1991, drivers received only 10 points for a win.

Prior to 1991, a driver would claim nine points for a win, and eight points between 1950 and 1960. In addition, there were fewer races in season, and up to 2009 only the top eight finishers got points.

Overall, the last 10 years or so have been far more conducive to racking up points, and the modern points system certainly skews the count in favour of drivers over the past decade. Rosberg’s additional half point comes from the 2009 Malaysian Grand Prix when the race was stopped due to rain on lap 31 of 56. Half points were awarded as full points are only given after 75% of the race has elapsed.

While Hamilton will have to beat five other drivers before he breaks Raikkonen’s record of F1 races started (a whopping 334 entries and counting) he does hold the record for the most consecutive race starts. After testing positive for COVID-19, Hamilton had to miss the 2020 Sakhir Grand Prix. Before this, Hamilton had never missed a start since his 2007 debut.

Most entries with a single engine manufacturer

Hamilton’s cars have only ever been powered by Mercedes, whether with McLaren between 2007 and 2012 and of course now with the Mercedes works team. Thus, he has more than surpassed his competitors in this record.

Hamilton consecutively scored points 48 times between the 2018 British Grand Prix and the 2020 Bahrain GP, missing the following Sakhir Grand Prix after contracting COVID-19. This is somewhat contentious; some may argue that because he did not start, his streak should continue because he did not technically record a non-points scoring finish. Nonetheless, Hamilton safely has this record secured not only thanks to his potency in Mercedes machinery, but also their reliability. 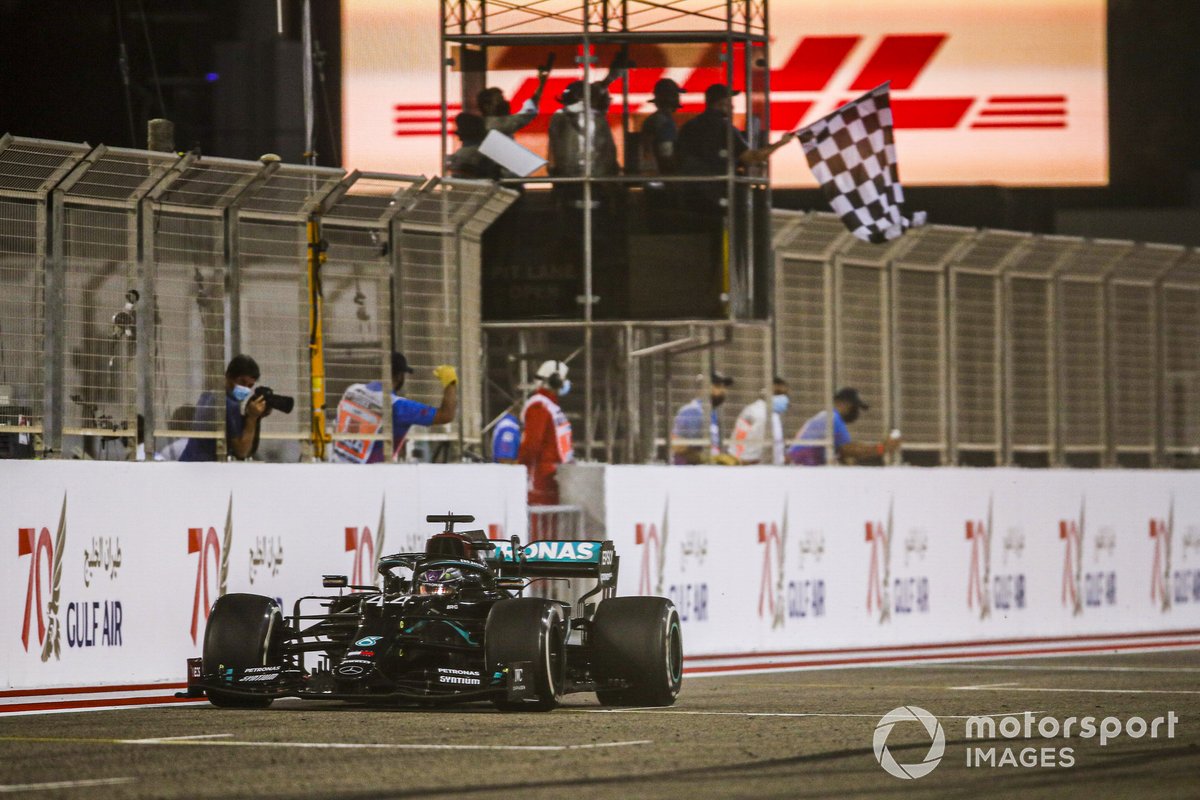 The lowest number of podiums Hamilton achieved in a single season was five in 2009 for McLaren, and also in 2013 with Mercedes.

Total races finished in the points

This is another record that Hamilton has taken from Schumacher. While the German may have started more races, Hamilton has finished in the points more often, scoring 239 times so far. Such has been the consistency of the Hamilton and Mercedes axis that he scored points in every race of the 2017 season – his worst finish being a ninth place in the Mexican Grand Prix. 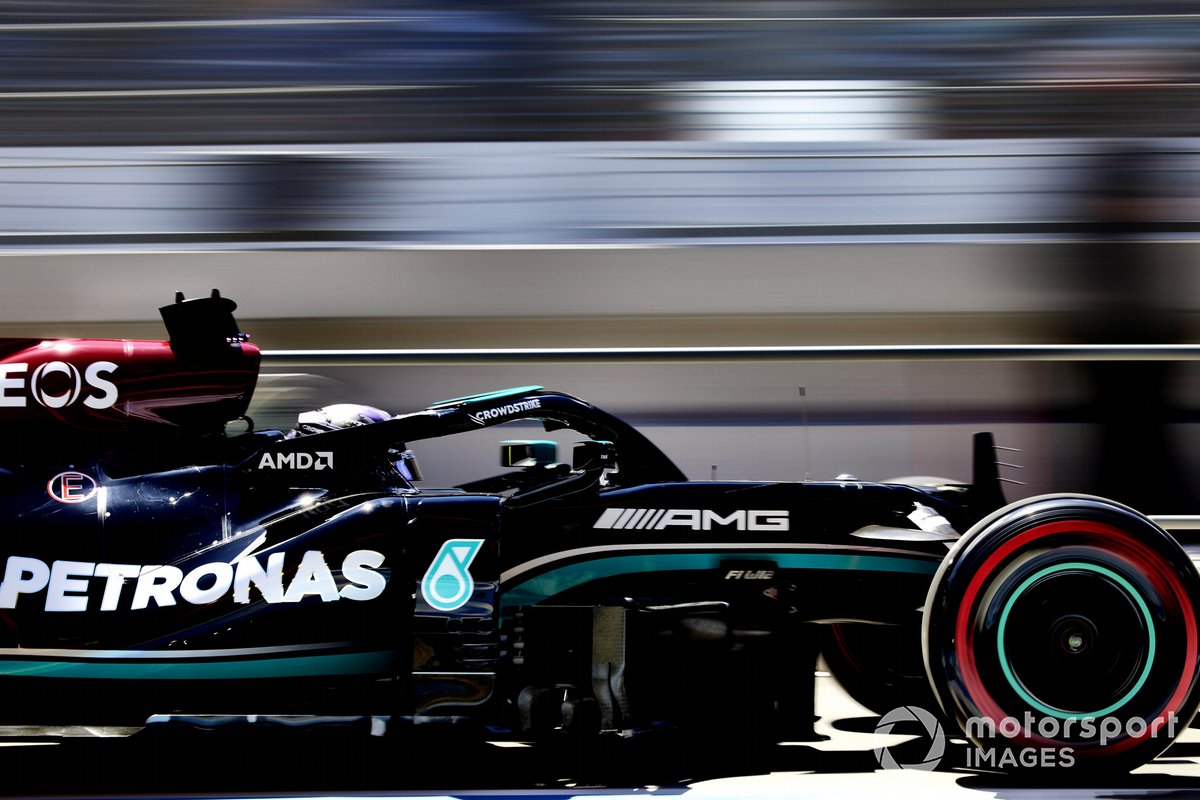 Again, the modern points system skews in the favour of modern drivers. It is an unusual record in the sense that drivers can knock themselves off the top by scoring fewer points, and therefore reducing your overall average, a reality which might affect Vettel based on his 2020 and 2021 points scoring precedent.

This is another record halted by Hamilton’s positive COVID test in 2020. Again, this is a testament to both Hamilton’s abilities and the reliability of the cars provided by Mercedes. 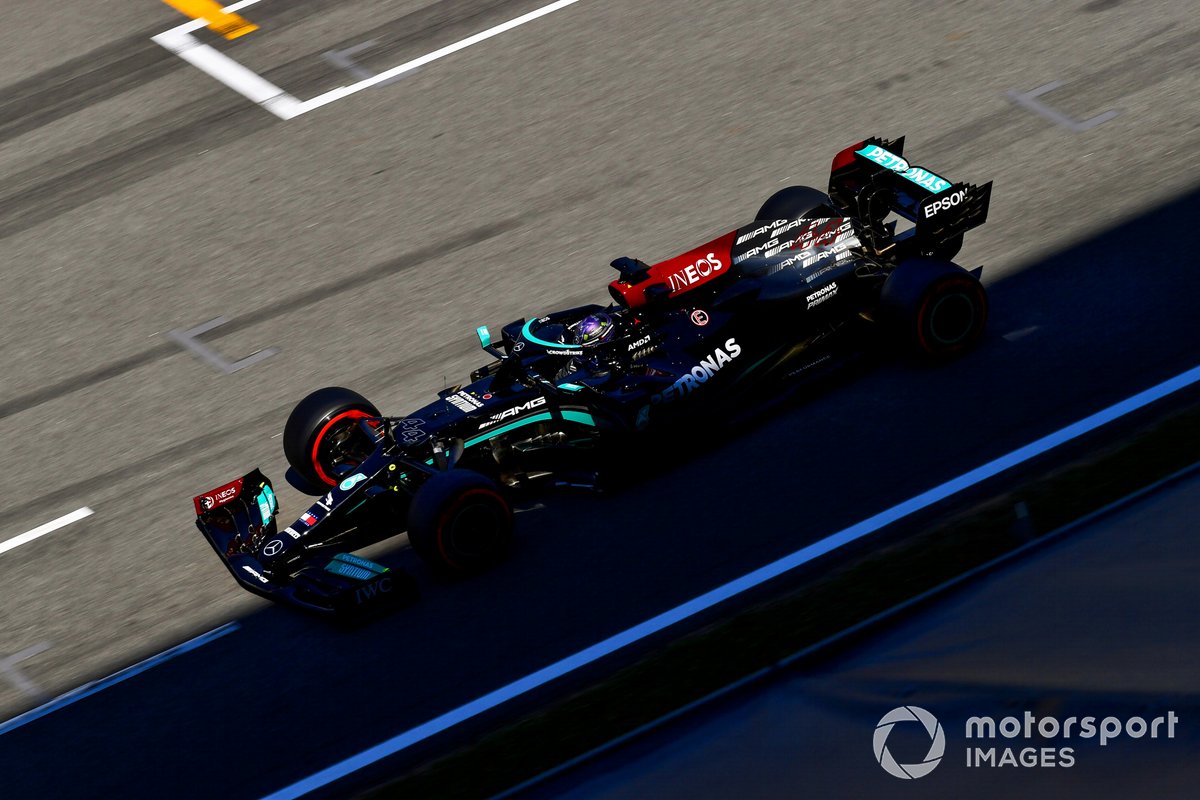 Out of the 15,495 laps he’s completed, Hamilton has led over a third of those – clocking a monumental 26,260 kilometres in the lead.

Hamilton first led every lap in a race in the 2007 Hungarian Grand Prix in his McLaren MP4–22, with a very close Raikkonen behind him.

Total pole and wins in the same race

The vast majority of Hamilton’s poles have been with Mercedes – with Melbourne being his most successful circuit for pole positions, where he has secured pole eight times.

Only driver to win a race in every season completed

Hamilton has won as little as one race in a season (2013), all the way up to 11 wins which he has achieved in multiple seasons since joining Mercedes. 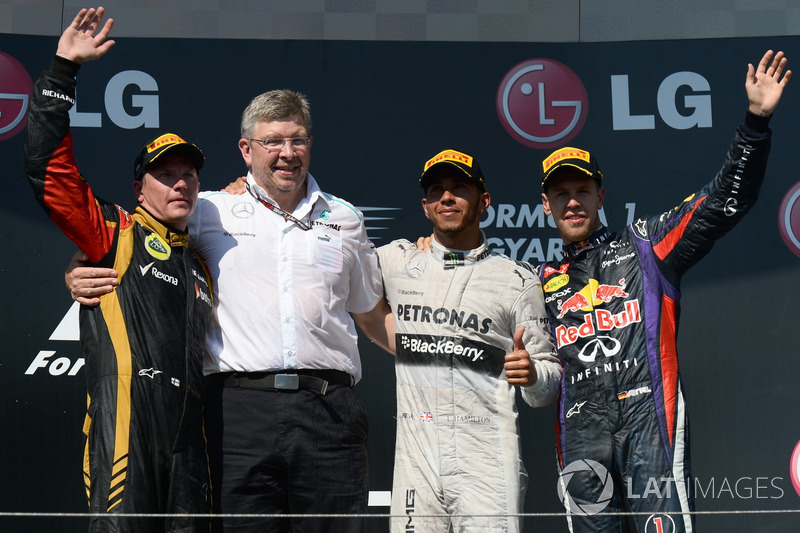 Records Hamilton shares with others

An eighth world championship in 2021 will likely be the next record on Hamilton’s radar, as he enters the summer break with a narrow lead over his Red Bull rival after the Hungarian Grand Prix.

He clinched his first world title in a particularly nail-biting manner in 2008 with McLaren, beating Ferrari rival Felipe Massa on the final corner of the last lap of the last race of the season. Each of his other six world championships were won with Mercedes. He is also the current world champion, after cruising to the 2020 driver’s championship in the dominant Mercedes W11.

Most wins in first championship season

This is obviously not a record that Hamilton can work on beating, so he will have to settle with sharing this record with 1997 world champion Villeneuve – who broke out of the traps in impressive fashion the previous year with Williams.

Only Hamilton and Montoya have achieved a win in their first championship season since the turn of the century (Hamilton in 2007 and Montoya in 2001) which is likely a reflection of increased use of junior teams – and drivers graduating from junior categories into cars that are unfortunately not capable of winning a race. Pierre Gasly’s win at the 2020 Italian GP may serve to prove that point wrong though, after taking victory in an AlphaTauri.

Most wins at the same grand prix

While Hamilton shares this record with Schumacher like many of his other records, this one is slightly difficult to rank because while Schumacher and Hamilton have each won eight times at their respective GPs, Hamilton has achieved the feat at two different GPs.

They have also each won seven times at other grands prix each (Schumacher on two occasions to Hamilton’s one), and then six times at seven more GPs between them.

While Prost and Senna are also ranked, Hamilton and Schumacher would still cover the top five easily between them if repeating drivers. 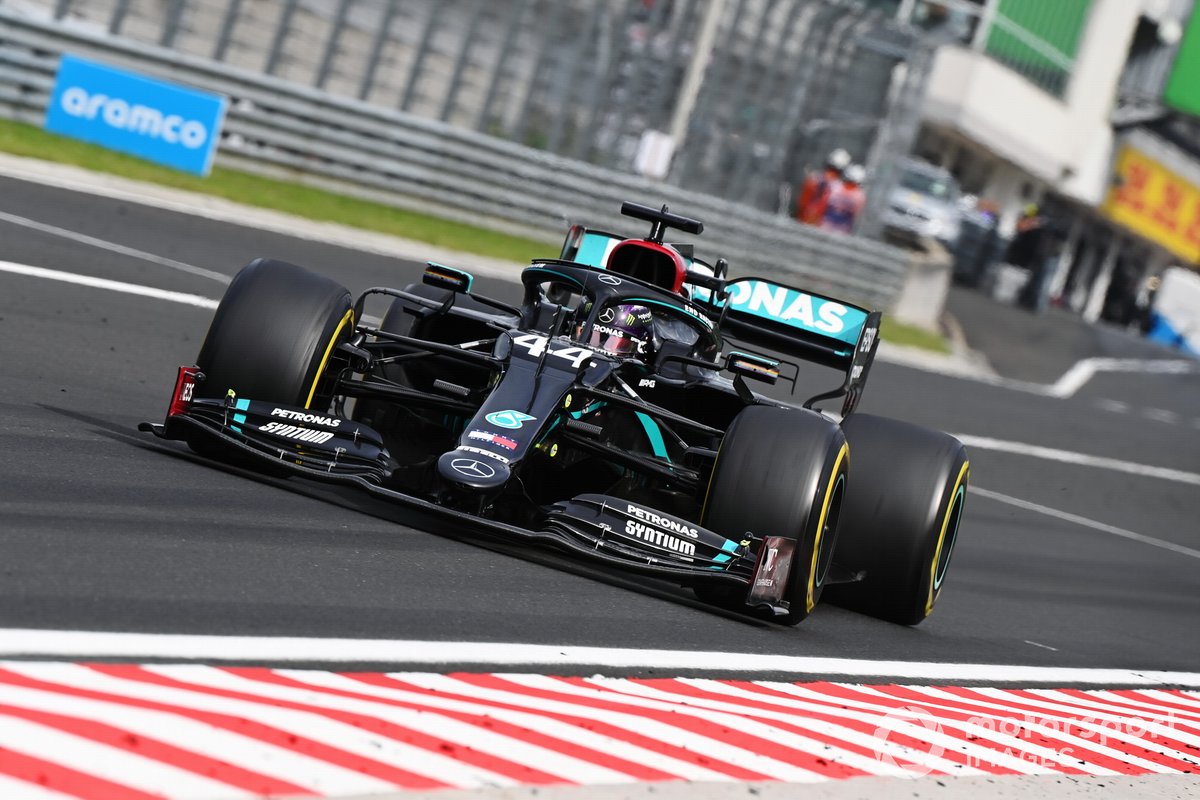 Most consecutive wins at the same grand prix

Hamilton’s record for most consecutive wins at the same grand prix is still ongoing, as he has won the Spanish GP every year since 2017 – including 2021.

Most consecutive seasons with at least one grand prix win

Having won a race in every season he has competed in (2007–2021), Hamilton’s streak is still ongoing.

Most podium finishes in a season

Hamilton achieved 17 podium finishes in a single season four times, in 2015, 2016, 2018 and 2019. Remarkably, Schumacher’s 17 podiums were the result of only 17 entries that season, so that could be a feat Hamilton could aim for, although it is no longer possible in 2021 after a tough weekend in Monaco.

Another record that Hamilton shares that he cannot work towards holding alone. However, the nature of contemporary F1 means that junior drivers seldom step up into race-winning cars, so he may have this record for a fair while.