There’s a city buried under Lake Lanier (Georgia’s biggest lake), and submerged with it is a secret: An American horror story filled with terror, death, genocide, and ghosts.

If you spend any time in or around Atlanta, you’ve heard tales of Lake Lanier. There are the eerie accounts of fishermen seeing ghostly kayaks floating on the water, or women with no hands roaming the Jerry D. Jackson bridge. Every so often, someone loses their life at the lake and leaves behind stories of good swimmers being snatched under the water, unexplainable boating accidents, or vehicles crashing into the lake without cause.

Many folks who live close by will tell you straight up, “Don’t go to Lake Lanier.” And its death toll certainly validates their point. There have been well over 500 deaths since the lake’s inception and more than 200 since 1994. Whether the lake is cursed or not is entirely up to you. But, one thing’s for certain, its horrifying past adds a much-needed perspective to understanding its haunting present.

Lake Lanier is a massive 57.92 square-mile reservoir that was established in 1956 with the completion of the Buford Dam. To this day, it helps control flooding along the Chattahoochee River, as well as provide water and power to residents near Atlanta. However, to get a clearer picture of how and why this behemoth of a lake exists, we’ll need to go back 45 years before its creation — to 1912, in the small African-American town of Oscarvllle.

Settled along the Chattahoochee waters, Oscarville was home to roughly 1,100 black folks, most of whom were freed after fighting in the American Civil War. Many worked as hands in the cotton fields or performed odd jobs for white residents in the surrounding neighborhoods. They managed to make a decent living for themselves, creating a healthy community with churches, schools, and small businesses.

Still, on edge from the Atlanta race riots of 1906, many locals feared more violence could erupt at any time. Black-American sociologist and author, W.E.B Du Bois, penned an emotional essay, called A Litany of Atlanta which was printed in local newspapers and captured the shared pain, fear, and terror black people felt in the south during that time.

“Forgive us, good Lord; we know not what we say!”

“Bewildered we are, and passion-tossed, mad with the madness of a mobbed and mocked and murdered people; straining at the arm posts of Thy Throne, we raise our shackled hands and charge Thee, God, by the bones of our stolen fathers, by the tears of our dead mothers, by the very blood of Thy crucified Christ: What meaneth this? Tell us the Plan; give us the Sign!”

Read all of W.E.B Du Bois’ A Litany of Atlanta

It was clear that in the early 1900s, blacks in Atlanta lived in constant fear of violence. For the small town of Oscarville, that fear would turn into brutal reality.

On September 5th, 1912, a 22-year-old white woman named Ellen Grice claimed two black men tried to rape her, but were unsuccessful because they were scared away by her mother. The Forsyth County Sheriff arrested five black men for the alleged assault. News of the attack and arrests caused quite a stir in the surrounding black communities. A vocal black preacher, named Grant Smith, appealed to the Sheriff to release the men. He claimed there wasn’t much evidence to hold all five men accountable for assault, and also suggested that one of the men could have already been in a consensual relationship with Grice. Many whites were outraged by Smith’s allegations and an angry mob beat and horse-whipped the preacher on the steps of the courthouse, almost taking his life.

A week later, on September 12th, 1912, an 18-year-old white woman named Mae Crow was raped and beaten in the Big Creek community of Forsyth County Georgia. The next morning Crow’s body was found half-naked, bloody, and hidden under a pile of leaves. Her skull had been bludgeoned with a stone, but she was alive and barely breathing. Searchers would allegedly find a small pocket mirror at the scene of the crime that was said to belong to Ernest Knox, a 16-year-old black boy from Cumming, Georgia. Knox was arrested at his home, then subjected to a mock lynching, which led to his coerced confession for the attack on Crow.

As word spread of the attack on Crow and the confession by Knox, whites became increasingly angry. It wasn’t long before a lynch mob formed in front of the jailhouse where Knox was being detained. Officers had to sneak Knox out the back door late that evening, just to keep him from being hanged. He was taken to a jail in Atlanta for his protection, but would soon stand trial for the attack. The next day, four additional men (Oscar Daniel, Rob Edwards, Jane Daniel, and Ed Collin) were arrested and taken into custody, suspected to be accomplices to the 16-year-old. All of them black. Soon, another angry mob of more than 2,000 whites had stormed the county jail, gaining access to the cells. They shot and killed Rob Edwards, dragged his body from the jailhouse, and hung him from a telephone pole in the town square.

Oscarville would end up being one of their main targets, and over the short period of just a few years, 98% of its black residents would end up either leaving their homes or being murdered for refusal to move. Black property deeds found their way into the hands of white neighbors without any bill of sale or transfer. This effectively allowed many whites to steal the land once owned by their black counterparts when they were driven out by the “Night Riders.” More than 1,100 blacks would lose their livelihood, and in little time, the once functioning African-American town of Oscarville would be a ghost town.

Over time, pieces of the land would be sold to the government, and by 1950 a plan to build Lake Lanier was in full effect. Soon the entire town of Oscarville would be underwater, intentionally flooded in conjunction with the Buford Dam to support the growing demand for a water supply to the nearby cities. The resulting reservoir was named after Sidney Lanier, a poet, and musician (who was also a Confederate private). In the end, construction would destroy more than 50,000 acres of farmland and displace more than 250 families. It would also relocate 20 cemeteries (and their corpses) in what some may see as an attempt to erase the sins of its past. 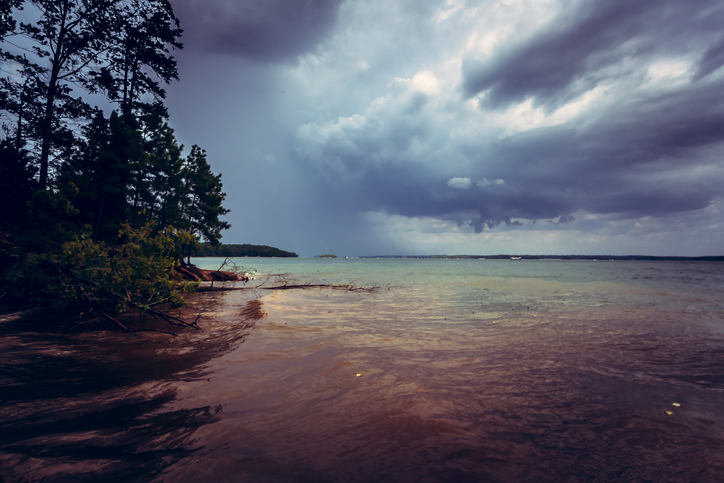 So, Is Lake Lanier Haunted?

Maybe it’s haunted by the culpability of genocide, terror, and a hatred for blacks that cannot be ignored. It’s interesting to note that The Forsyth County Newspaper was created in 1908, but its records before 1917 are completely missing? Why? It’s our duty as Americans, to be honest with ourselves about the past. Atlanta and its surrounding areas have a deep-rooted history of inflicting terror onto the black community. Unfortunately, this story, like so many, has been relatively hidden, stolen away, and drowned beneath a lake filled with pain and suffering.

We may not have facts, but we do have folklore. Stories like these are passed down through the generations, as a means to keep us safe. Some “culture rules” black folks might not understand, but they sure do follow, like: “Don’t go to Lake Lanier.”

Therapist and Psychology Grad Student, Sheena McLaughlin grew up in Decatur, Ga in the ’80s. She recalls many stories about Lake Lanier growing up and the folklore of a black city under the lake:

Q: Growing up in Decatur, did you ever hear any stories about Lake Lanier?

A: For sure, amongst the various tales that we would hear, one of the prominent ones was lake Lanier. From a younger age, I recall there would be jokes and hints that lake Lanier was a dangerous place and that you might visit, but don’t go in the water. As I got older I got a little more detail behind the stories and it became a lot more of a folktale, they would speak about the town underneath, how it was haunted. The black folks buried underneath the water would snatch you under. We would hear stories of graves and bodies that were never removed when they built a man-made body of water over black spirits.

Q: Do you believe that lake Lanier is haunted?

Q: Have you ever been to Lake Lanier yourself?

A: Oh, yes many times. Growing up we would do boat trips every so often, but as I got older and learned more about the lake I couldn’t bring myself back to that place. I haven’t been in 15 years.

Like Sheena, many folks in the south are starting to learn the truth about Lake Lanier. No longer folklore, but not quite fact, history begins to bleed into the present as we get closer and closer to the truths of the past. Sadly, stories like these from the 1900s are hidden all over the south. Black communities were destroyed before having a real chance to thrive. Communities like Oscarville are just the tip of the iceberg in understanding the terror southern black folks faced in the periods after the American Civil War.