When health care workers Yasmin Samatar and Faraoli Adam were on the frontlines of the pandemic, they struggled to find personal protective equipment for Muslim women like them. So they launched Mawadda, a line of hygienic hijabs to help keep Muslim health care workers and patients safe in the hospital.

Without the proper PPE on-hand, Samatar and Adam and their hijabi colleagues were left to figure out their own solutions. They started bringing their own cloth headscarves from home, changing and discarding them constantly to avoid contamination. It was time-consuming, wasteful and stressful, Samatar said.

“COVID is deadly, and we all got familiar with the term PPE. But Muslim health care workers were left out because nobody thought about it,” Adam said.

Samatar and Adam, both 29, met at St. Catherine’s University in St. Paul, where they studied to become respiratory therapists.

They started working together as traveling health care workers during the pandemic, working in cities overwhelmed by COVID-19 cases.

Usually, hospitals provide health care workers with sterile protective equipment: everything from shoe covers to hair nets. But they didn’t have a head covering that met hijabi standards.

The more they worked in hospitals, the more Samatar and Firaoli spoke to other Muslim health care workers facing the same issue. They even heard stories of Muslim patients wearing bedsheets over their head during procedures because there were no sterile hijab options. Samatar and Firaoli decided the problem couldn’t wait any longer and decided to fix it themselves.

In the spring of 2021, the pair took some time off from work and turned all their focus to launching their company. They started designing the product and sourced a supplier. In the fall, they raised about $10,000. And most importantly, they’ve been testing the product with Muslim health care workers in different focus groups, Samatar said.

“We had to find the right material so it’s not too hot or thick, but also not too sheer and meets hijabi modesty standards,” Samatar said.

They settled on two disposable designs: the Zanub, a pull-over with an adjustable elastic band around the face, and the Ikram, a one-size-fits-all wrap. The hijabs are designed by Rammy Mohamed of Ramadahn Designs, a local business that recently opened a brick-and-mortar store in the St. Paul skyway.

The pair launched their business entirely on their own and secured FDA Compliance in order to ensure the hijabs met safety protocol.

“We definitely called the FDA line like, all the time,” Adam said. “So it took a little bit more work.”

“We had to learn a whole new language,” added Samatar. “We’re health care workers, we’re not from the business side. So that was a different world of its own.”

Mawadda officially launched on Nov. 9, and has since gained international attention, with 30 percent of their reach coming from France, according to business analytics on their website. Their site has also reached users in the United Kingdom and China.

“It’s just been crazy. It was like — we didn’t think about how it would reach this many people,” Adam said. “Everybody had the same story.”

The goal is to sell their products to hospitals through procurement, but the products are also available on their website, usmawadda.com, for individuals. Health care workers receive a special discount. “Most people are shocked that this isn’t already provided in hospitals. And the recent push for diversity and inclusion definitely helped us,” Samatar said. 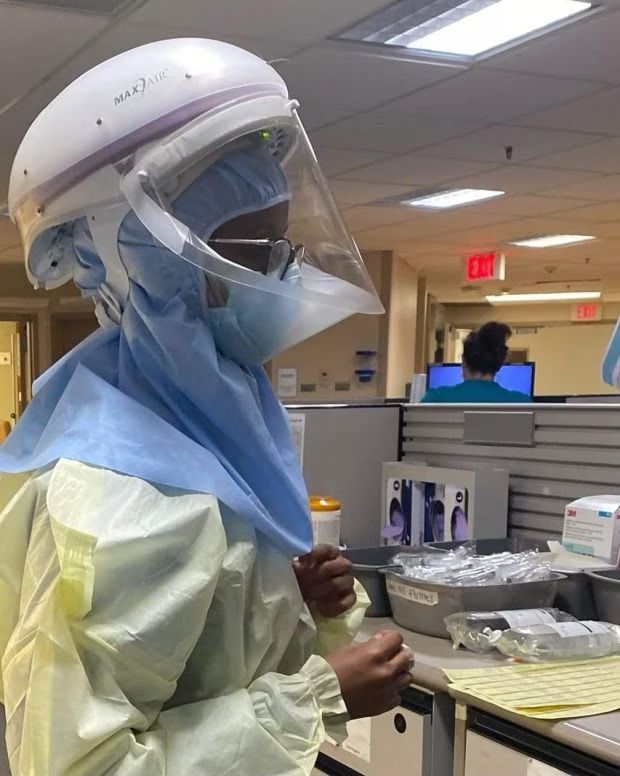 Mawadda’s warehouse is based in New York, and manufacturers ship the products for online orders to Samatar and Adam as well as send the products directly to hospitals that place orders.

Samatar and Adam are currently the only full-time employees at Mawadda, and Samatar is still working night shifts. They said that their community and Ramadahn Designs have been incredibly helpful and supportive.

“We have some family members and close friends in case we need extra work from here to there,” Adam said. “They’re always stepping in.”

The two hope that providing culturally appropriate protective garments in hospitals will lead to more inclusivity and comfort for Muslims in health care.

“It’s created by us, for us. But having culturally appropriate protection won’t just affect us, it will affect everyone under the care of a Muslim woman: patients, families and communities,” Samatar said.