THE IMPACT OF THE BLACK VOTE AND INSTITUTIONALISED RACISM

As a political and equalities activist Lord Simon Woolley has become the first black man to be elected head of an Oxbridge college.
Listen to Lord Woolley’s intimate podcast conversation about his early adopted life, working as a car mechanic, the creation of Operation Black Vote, the step into the political sphere and the defunct report in Race Disparity in the UK by Dr Tony Sewell CBE.

Simon Andrew Woolley, Baron Woolley of Woodford, is a political and equalities activist. He is the founder and director of Operation Black Vote and Trustee of the charity Police Now. Woolley has been a crossbench member of the House of Lords since October 2019. He was Chair of the Government of the United Kingdom Race Disparity Unit Advisory Group until July 2020. In March 2021, his appointment as Principal of Homerton College, Cambridge, was announced

Woolley left school without A-Levels and started his working life in an apprenticeship as a car mechanic. He moved to London at the age of nineteen and spent four years in advertising for The Rank Organisation in Wardour Street, before deciding to study Spanish and Politics at  Middlesex University. During his studies, Woolley spent time in Costa Rica and Colombia,[he went on to earn a Master of Arts in Hispanic literature at the Queen Mary University of London.

Woolley served as a Commissioner for the Equality and Human Rights Commission and released Woolley’s report How to achieve better BME political representation. He was appointed to the Equalities Commission in 2009. He has launched two governmental investigations, including REACH, which looked to tackle the alienation of black youth, as well as working with Harriet Harman on the political representation of black and minority ethnic women. He worked with Bernie Grant, Al Sharpton, Naomi Campbell and Jesse Jackson on grassroots campaigns highlighting racial discrimination. 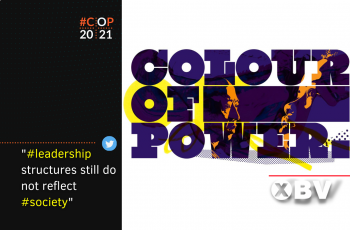 The Colour of Power 2021: Your reaction

The Colour of Power 2021 launched just over two weeks ago and the project has generated notable reaction. 2017’s iteration looked to visualise how power was dispersed along ethnic lines. Focus was also placed on the representation of women in leadership and how well the dynamics of wider society were reflected across 39 important areas of public life. Post adjustment, The Colour of Power 2021 figures revealed that there were 72 black, Asian, and minority ethnic (BAME) faces in the UK’s top political, public, and cultural sectors.

The Head of the Law Society Stephanie Boyce’s response was an apt one following an 18-month period that has seen unprecedented discourse regarding race and the current state of play in the UK. Boyce, who became the society’s 177th lead and the first black officeholder in March, added that despite the low figures it was “encouraging to see signs that things have begun to shift in the last year”.

‘Slowly getting there’ was a common response among online commentators looking to see talk of change translate to a change in power.

One of the perks of The Colour of Power 2021 is that it serves as a directory which can be referred to in the future. This has been identified as a distinguishing feature of the project.

This is great. I reference this in a lot of our work, I note the old data had disappeared, so glad it’s back!

“…not only are there only 20 black people, but there are zero (openly) trans or non-binary people.” – Haley Sims

As with many others on the list, Kim made history as the first black woman to lead the council. She is joined by Ian Thomas, CEO at Kingston-Upon-Thames, Althea Loderick, CEO of the London Borough of Newham and Bromley’s 2019 appointment Ade Adetosoye.

The figures regarding openly trans & non-binary individuals are similarly unsurprising. A recent YouGov study showed that more transgender people are hiding their identity in the workplace compared to five years ago. The figures prompted a new wave of calls for businesses to develop policies around trans inclusion in the workplace.

Really powerful use of and presentation of data in this tool to illustrate the #colourofpower. Also worth pointing out that of the over 1,100 most powerful people in the UK included, not only are there only 20 Black people, but there are 0 (openly) trans or non-binary people.

Melanie Whittaker of the British American Drama Academy’s comment was one of the primary sticking issues addressed by OBV COO Ashok Viswanathan. He noted that there was still more work to be done, pointing out that the makeup of The Colour of Power 2021 only reflected “50% of modern society.”

“I think the proof will be in the pudding.” – Joanne Anderson

The newly elected Mayor of Liverpool discussed The Colour of Power 2021 with Channel 4’s Cathy Newman. Anderson, who has spent a significant portion of her career focusing on issues of race and equality, was forward looking in her assessment.

“Having worked in race equality for about 30 years we have had progress in the past. I think the proof will be in the pudding. Will this lead to long-standing change in 10 years time? Will the picture be the same or will the picture have gone backwards? But I think it’s very important to celebrate when there is progress.”

August 10, 2021
“Spending time in a space of self-reflection is time well spent, it is preparation for…

An enormous 1,174-carat #diamond has been unearthed in #Botswana, a mining company has said, the…
#AfricaRising

Michelai Graham Jul 17, 2021 Working from home provides a certain freedom and flexibility that…

The United States would not be the country it is without #Haiti.

One mom comforted another after her daughter was struck by a stray bullet. A year later, the roles are reversed

Paula Clark, the first Black and first Woman Bishop of the Episcopal Diocese of Chicago

Paula Clark, the first Black and first Woman Bishop of the Episcopal Diocese of Chicago…