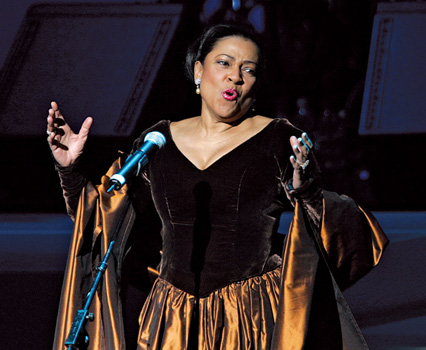 Kathleen Battle, born in 1948 in Portsmouth, Ohio, is a light-lyric, coloratura soprano with a distinctive sweet timbre and a wide range.

Initially she won critical acclaim through concert works presented under conductors such as Thomas Shippers and Herbert von Karajan.  Beginning in 1975 and throughout the 1980’s and early 90’s, she produced pristine,  international performances concert and in opera.

At that time her most acclaimed solo work included Zerbinetta  in Ariadne auf Naxos for which she received many awards,  Bach’s solo Cantata 51: Jauchzet Gott in allen Länden, recorded with trumpet master Winton Marsalis, and a unique album with classical guitarist Christopher Parkening (The Pleasure of Their Company), which was nominated for a Grammy as Album of the Year.  In all she garnered  7 Grammys and 6 American honorary doctorates among many other awards.

During that period, under the direction of Sylvia Olden Lee — the esteemed Metropolitan Opera (MET) coach and master of the concert spiritual who originally brought Marian Anderson to the MET) —  Battle  sought to master the concert spiritual–a genre of sacred song originated by enslaved Black people but arranged for the operatic voice in concert.
This inspired a Christmas album that featured several concert-spirituals (most arranged by the renowned composer-pianist Jacqueline Hairston) and a legendary collaboration with soprano Jessye Norman and Maestro James Levine in a televised special on the concert spiritual.
Battle sang abroad, but made her operatic home at The Metropolitan Opera.
However, in 1994, after a period of disputes, the celebrated diva was released from the MET and shunned by several other opera houses.  Undaunted,  she  extended her long-standing interest in unique collaborations:  Among them were film soundtracks and little-known song recordings– One album featured works of Catalan-Spanish, classical  composer Xavier Montsalvatge; others were crossover song collaborations with popular and jazz artists such as Queen Latifah, Janet Jackson, and Al Jureau.  In 1999 Kathleen Battle was given an NAACP Image Award.
Ultimately in the 2000’s Miss Battle, who had never left the classical genre,  would again issue traditional classical recordings, but in 2017, after an absence of 22 years, Kathleen Battle returned to the stage of the MET with her own touring  program of concert spirituals  (The Underground Railroad).  The program continues to tour and thus, establishes Kathleen Battle, through the length and impact of her career, as a preeminent classical artist of our times.

On behalf of Black Wall St. Media we would like to offer ours thanks to Susheel for such a favourable article written about Kathleen Battle. I am sure that you have helped us gain a better understanding than we could ever have expected of such an inspirational figure.