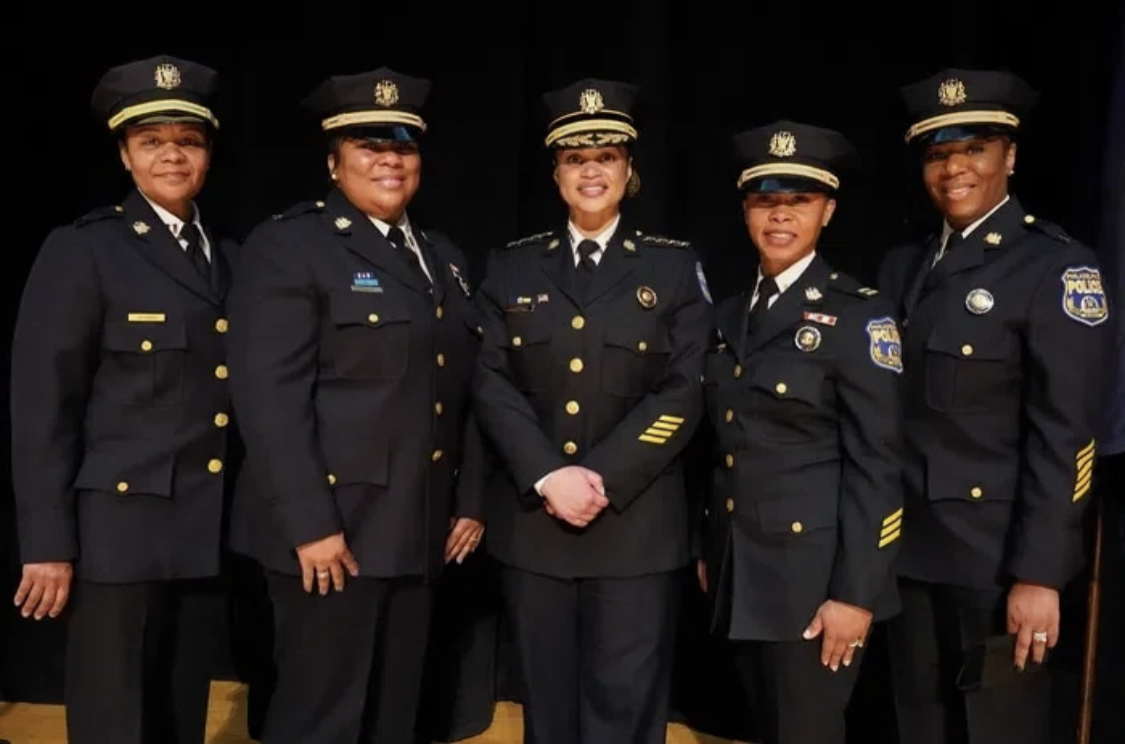 In an industry where the old boys network reigns supreme and is as dominant as the color blue, these four women managed to defy the odds and in the process make history.

You’re sick of all the bad news about Philly’s losing war against the skyrocketing homicide rate.

I’m sick of all this senseless bloodshed, as well as the excuse-making by do-nothing politicians. It’s enough to make you want to give up.

But that’s not what this column is about. I have good news to report for a change! On Wednesday, I attended the promotional ceremony for Philly’s Police Department at Temple University and got a chance to meet four newly promoted captains. And get this: They were all Black, female, and awaiting assignments to leadership positions around the city.

That’s the most in a single class in the history of the department. I had the pleasure of meeting the four of them shortly following the ceremony after they posed for photos with Commissioner Danielle Outlaw, the city’s first Black female top cop. In an industry where the old boys network reigns supreme and is as dominant as the color blue, these four women managed to defy the odds and in the process make history. In other words, they’re badasses.

I’d be lying if I didn’t admit I was impressed.

Ironically, it happened on the same day that most of us learned that incoming New York City Mayor Eric Adams has selected Keechant Sewell‚ a Long Island police official, to be that city’s next police commissioner. The first woman ever in the position, she’ll be leading the nation’s largest police force.

So, as Sewell was shattering an especially thick glass ceiling in NYC, shards were flying around in Philly as the four newly minted captains walked across the stage at Temple University and their names were called out: Margo Alleyne-Parker, Colleen Billups, Myesha Massey, and Chanta Herder.

“I hope that people will look at us and see that it is attainable,” Herder told me afterward. “It can be done.”

I had hoped that after George Floyd was killed by that Minneapolis officer and widespread protests and rioting, there were going to be some changes in policing — not just in terms of dealing with police brutality but also in diversifying the ranks. It’s encouraging to see Black women getting promoted not just here but nationwide.

Police forces have been too male and too white for far too long, particularly in the upper ranks. It’s way past time that women of color started getting more opportunities to lead. I’m sure that the late Rae Marie Warner, who is believed to have been the first African American woman to join Philly’s force in 1970, would agree.

The numbers for women have improved, of course. The department says women now represent 22% of sworn personnel, which is far better than the national average. But it’s still not good enough. Under the 30X30 program, the department aims to have women represent at least 30% of recruits by the end of this decade. Having a Black woman in the top spot is reason for hope.

“We have so many good things going on in this department at the lead of Commissioner Outlaw,” Billups said.

Former Philly Police Commissioner Sylvester Johnson, who was also at Wednesday’s ceremony, told me it was the first time in his memory that four Black women had been promoted to captain at one time. As of Wednesday night, they still were waiting for their new assignments.

“For the last five years, you’ve only had one Black female captain in the districts,” said David Fisher, a 29-year veteran of the Philly Police Department and president of the National Black Police Association, an advocacy organization whose representatives met with Outlaw last week. “It’s good in neighborhoods where there are a lot of African Americans, that they see a Black person in charge of the district in their community.”

He added, “They can relate to the people that they are there to serve.”

And let me remind you who they are here to serve: a city that’s 53% female and 44% Black. Thanks to the promotion of the four African American female captains, a quarter of the city’s patrol districts will now be run by a Black woman.