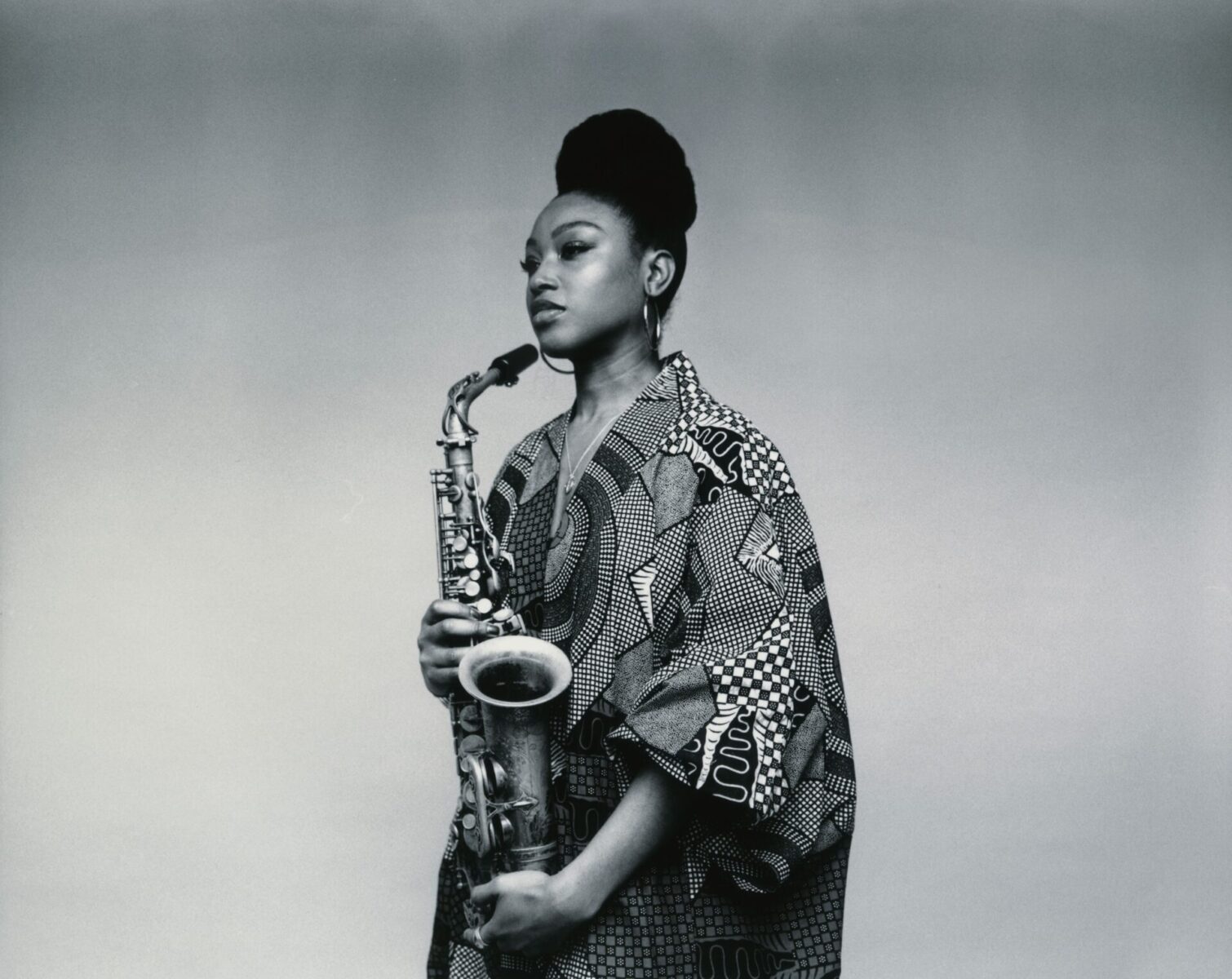 London (UK) alto saxophonist Camilla George pays homage to her Ibibio and ethnic heritage on Ibio-Ibio (EVER102CD), her third release as a leader.

The Ibibio people hail from Akwa Ibom and Cross River states in southeastern Nigeria. Camilla was born in Eket, a coastal town in the vast riverine and heavily forested part of Africa’s most populous nation, where the River Niger empties itself into the Atlantic.

Guitarist Shirley Tetteh sets the scene for Camilla’s piquant sax solo on the infectious Creation – Abasi and Ettai. Spoken word artist SANITY takes centre stage by updating the legend of Abasi, the supreme ruler or God of the universe and his wife Atai, goddess of mediation. They are said to have created the Ibibio people in their own image.

Kadialy Kouyate’s gentle kora solo on Journey Across the Sea floats atop the danceable groove set up by the unison horns of George and trumpeter Sheila Maurice-Grey. Rosie Turton’s trombone solo also blends into this unmistakeably buoyant vibe.

The hip-hop flavoured The Long Juju Slave Route of Arochukwu, narrated by SANITY and Daru Jones, interprets the tale of a legendary slave route (during the Transatlantic slave trade) which began at the south-eastern Nigerian town of Arochukwu. The location is the site of an ancient cave temple and shrine to Ibini Ukpabi, at which sat a greatly feared oracle (which British colonisers are said to have mis-named the Long Juju) who acted as a judge and mediator in local disputes.

The laid-back, straight-ahead-jazz-ballad feel of Abasi Enyong provides a good opportunity for Camilla to strut her chops and possibly reveals Sonny Stitt and Art Pepper influences, receiving empathetic support from the consummate upright bass of Daniel Casmir in the process.

Abasi Isang, by contrast, is effervescent and percussive – a beautiful composition which sees Camilla go head to head with Turton, Maurice-Grey and Tetteh.

Camilla is a saxophone player, improviser, composer and teacher who began playing at the age of 11.

She has studied with several jazz notables including Jean Toussaint, Tony Kofi, the late Christian Brewer, Julian Siegel and Martin Speake. In 2012 she graduated with a Masters in Jazz from Trinity College of Music where she also won the Archer Scholarship for outstanding performance.

Since 2004, she has been working with both Tomorrow’s Warriors and the Nu Civilisation Orchestra as well as leading workshops for the younger members of The Warriors family. In 2009 she joined award winning band, Jazz Jamaica whose alumni have included Jason Yarde, Soweto Kinch and Nathaniel Facey. In 2014 she also joined Courtney Pine’s Venus Warriors, an all-female super group who made their debut gig at The Hideaway jazz club.

On Ibio-Ibio, Camilla’s high level of artistry, intriguing song titles, and equally lively cadences, act as gateways into the bountiful history and traditions of a proud and fascinating people in West Africa.

Mary J. Blige says her upcoming all-women music festival is all about ‘building each other up’

Mary J. Blige says her upcoming all-women music festival is all about ‘building each other up’