Bullied and disciplined: How Black nurses are being failed

The Covid-19 pandemic has sparked an increase in racism experienced by nursing staff, according to the founder of an organisation set up last year to promote equality.

“If they were experiencing racism before Covid, now it will have increased,” said Neomi Bennett, the Black British agency nurse who created the Equality 4 Black Nurses (E4BN) group in July 2020. She described racism in the health and care sector as being at “boiling point” and a “pandemic in itself ”.

“We nurture and welcome all new nurses joining our organisation”

Ms Bennett told Nursing Times she thought nurses from minority ethnic groups were more scared of racism than Covid-19, and that the pandemic had exacerbated underlying problems.

“Somethings’ going on where the anger and all the emotions are being targeted at Black and Asian nurses in a way that’s a pandemic,” she said, also noting potential compounding factors such as the Black Lives Matter movement and the murder of George Floyd.

Her view was reflected by other members of E4BN who told us about their own individual experiences.

Linda, a White and Black African nurse who works in social care, spoke to Nursing Times about being bullied by colleagues both during the pandemic and more broadly throughout her career.

In one situation, Linda said she was assisting a patient who was altering their bandage, having just come from the operating theatre.

A nurse reported Linda to senior staff, she said, claiming that Linda had been attempting to interfere with the dressing before correct time had passed.

Linda said that this particular colleague was often rude to her but that no action was taken by senior staff, despite her having reporting the incidents.

In another, more serious incident, Linda was at home when a drug error was made on the ward; she said she was blamed despite her not being there.

“I was told I had a meeting, I asked whether the other nurses on the ward were being spoken to and the lead nurse said I don’t have to discuss that with you.”

Linda was subsequently redeployed during the Covid-19 pandemic, and said her negative experiences continued.

On her new ward, she said she was subject to racist comments from colleagues and that they would leave the room when she entered, and also hide mugs and cups. “I felt more or less treated like a leper,” she said.

In one incident, Linda said she was purposefully obstructed from getting the correct personal protective
equipment (PPE).

She said she was told it was in a room with a door code but her colleagues said they did not know the code. More PPE was available but, to get it, she would have to walk through a red-rated ward, which she could not enter without the appropriate PPE.

Having her job made more difficult was a recurrent incident, she said, with negative impacts on her wellbeing. “I couldn’t eat, I had no energy, I felt sick,” she recalls.

Linda told Nursing Times that on that particular ward, where she had been initially prevented from getting the correct PPE, six patients died of Covid-19.

She herself caught Covid-19 and then, while on sick leave, was involved in a traffic accident. She said she was then told by her trust that she no longer qualified for fully paid leave, as she was no longer absent due to Covid-19.

Linda also said that, when she initially caught the virus, her warnings that she might be infected were ignored, so she believed she could have potentially passed it on to others.

Diana, a Black woman working as a surgical nurse, told Nursing Times that she experienced racially motivated bullying, which started in April 2020.

She too caught Covid-19 and her sister died during the pandemic, both of which she said her employer knew about but failed to acknowledge.

Among a series of negative employment incidents, including some with potential patient safety consequences, she recounted that on one medical ward she was expected her to skip steps in procedures.

“I was expected to dispense medications while waiting for doctors’ signatures, when it should be given once the signature is received,” she said.

Diana flagged that this was not correct procedure and said that, as a result, her attitude was judged as “abrupt” and “challenging”.

In another incident, a support worker who had been working in the Covid-19 wards put her feet up near where Diana was seated on a break.

Diana asked the support worker to put their feet down but they picked a piece of paper off the floor, threw it at her and walked away. In another, a colleague asked Diana who looked after her children while she worked. 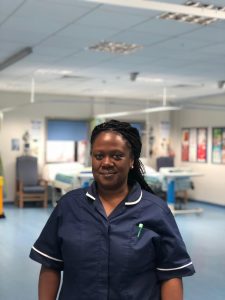 Diana responded that her husband looked after the children and mentioned their ages. Shockingly, she said another member of staff interrupted her, saying: “Five children with how many men?”

After a number of requests, she was eventually moved to a different ward, however, she said the bullying continued and it was one serious incident in particular that she said ended in her constructive dismissal.

A patient with dementia, who was under the care of another nurse, climbed into a fellow patient’s bed while the ward was short-staffed – being short-staffed was a point Diana had already mentioned to the ward manager.

She said she was wrongfully held responsible for the incident and had to suffer the indignity of being escorted out of the hospital by security, before being suspended for four and a half months.

“One support worker did speak out in support of me and gave an accurate account of what happened on the ward, and they were dismissed,” she said.

Diana also said her suspension did not follow the proper procedure: she was given a last letter of warning and told she must undergo a strictly monitored 12-month progress review or receive worse punishment.

She then left the organisation and said that she was given a negative reference by her manager, who Diana said had stated that she was unable to work nightshifts.

Linda and Diana are currently being supported by E4BN at employment tribunals with claims for constructive dismissal. Ms Bennett noted that, sadly, experiences like Linda’s were not rare.

Her organisation supports Black and Asian nurses, men, and women, straight and gay, with cases of unfair dismissals stemming from institutionalised racism.

Since last speaking to Nursing Times in September 2020, Ms Bennett highlighted that E4BN itself was developing to meet the all-too-common challenge of racism in healthcare.

The organisation has developed the Buntu Buddy system, in which peer members are on hand to support nurses through their experiences, and a triage system, which is used to classify the severity of a nurses’ racial trauma.

“Our rainbow triage helps us to asses how best we can support these nurses; some nurses may need a referral to our in-house therapist others may require an urgent referral to our Buntu Buddy because they are in a situation where they need legal support like advocacy.

“We help nurses to speak out about their experiences and in helping them to become self-litigant we join forces and become a louder voice with them,” said Ms Bennett.

She added: “In support of our members we attend employment tribunals, Nursing and Midwifery Council (NMC) hearings, appeal hearings and also internal disciplinary hearings and this support is crucial in enabling the nurse to speak their truth.

“Ultimately, what we’re really trying to do is get the message out to employers that enough is enough and we are no longer accepting racism within the workplace, nor are we accepting racist structures that are open for bias, unfair and disproportionate treatment.”

Ms Bennett argued that Black and Asian nurses were “never given the benefit of doubt during investigations and, more often than not, recieve disproportionate sanctions compared to white nurses”.

“What we’ve become as E4BN is that voice to speak out on their behalf. We are continuing to grow,” she said, adding that earlier members were staying to support newcomers.

“Most of our nurses, they come in and they make a declaration that once we’ve supported them and help them to overcome their issue, they will then jump in and they help address others, so we nurture all our new nurses coming in.

“We are still expanding. Using our existing nursing skills, we nurture and welcome all new nurses joining our organisation.”

See below for source:

Bullied and disciplined: How Black nurses are being failed

Black Nurses The Women Who Saved the NHS