The initial award announcement was made in July last year, but due to the pandemic, an official in-person ceremony and celebration has been unable to take place until now.The prestigious award is for his ongoing charity work and well-publicised campaign against child poverty off the field, as well as his outstanding sporting achievements on the pitch.

The accolade is the highest honour the University can bestow and, at just 23 years old, Marcus is the youngest recipient of an honorary degree in the history of The University of Manchester. 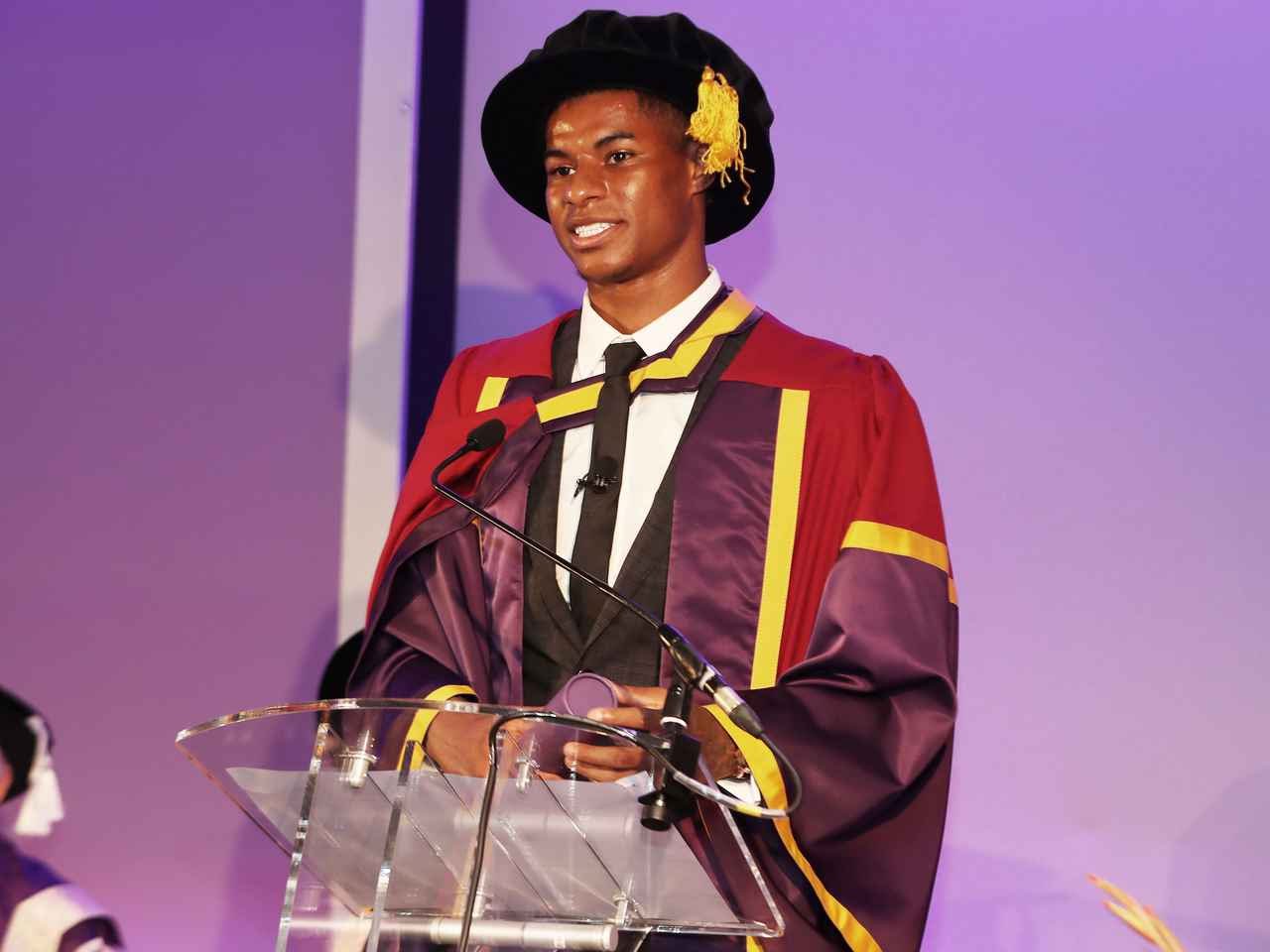 Marcus at the Old Trafford ceremony on Thursday evening.

He joins fellow Manchester United club legends Sir Alex Ferguson and Sir Bobby Charlton, who have also been honoured by the University in the past. Sir Alex Ferguson joined Marcus’s friends and family in attendance to see the England international receive his award from The University of Manchester’s President and Vice-Chancellor Professor Dame Nancy Rothwell.Marcus said: “To be here in the presence of a great such as Sir Alex, and those who have played a huge role in my journey to be where I am today is special.

“I’m here to receive my Honorary Doctorate for my work around child poverty. Yesterday, millions of families across the UK lost a lifeline and a means of staying afloat. A move that could see child poverty rise to 1 in 3 children. For that reason, today is bittersweet.

“It’s time that representatives got out into communities like mine. It’s time they saw first-hand the true measure of struggle. COVID-19 can no longer be used as an excuse.”

On presenting Marcus with his honorary degree, Professor Rothwell said: “Marcus is an exceptional young man who continues to demonstrate a sense of community and generosity that goes well beyond his years.

“Our University also has social responsibility at its core, and we are extremely proud to share these values with Marcus. It really is an honour to finally present him with this well-deserved award on behalf of our institution.

“His ongoing charity work and high-profile campaigns not only help millions of people across the country, but inspire many more to try and make a difference themselves. Long may it continue.”

In remarks at the ceremony, Collette Roche, Manchester United’s Chief Operating Officer, said: “Marcus is an exceptional footballer and an exceptional person. He is a young man who embodies everything which this club stands for – he is humble, he is passionate and he is driven to succeed in everything he does.“Those qualities have shone through in his work to champion the needs of young people, to tackle food poverty and to deliver real change which has helped thousands of families across the country when they needed it most.

“We are all so proud of you Marcus and it is wonderful for us all to be with you and your family this evening to see your efforts recognised.”